It's hard to believe how fast the years have passed with our eldest attending her first classes as a first-year law student at AUT University where she received her scholarship (although I'm hoping she'll jump ship and go to my alumni Uni of Auckland University but we'll see).

So on her first day of the orientation week, I decided to drop her off and to have a look around. It's amazing how the two Universities sit side-by-side i.e. AUT University on one side of Wellesley Street and University of Auckland (name changed) on the other.

I was reminded of the times I would race up the hill (those many years ago) and visit the other campus for cheaper stationery supplies etc. back when I used to be called AIT or Auckland Institute of Technology but that's all changed since it's become a University.

Our eldest is also attending an evening function tonight for all of the AUT scholarship recipients and would have been checking out an AT Auckland Transport hop card as well as the bus stops, bus timetable, and her own class timetable.

It seems like it wasn't that long ago since I first started and then graduated from U of A (University of Auckland) and later also graduating from AUT and looking back it had a lot to do with the support of my parents and the environment that they brought me up in PIC Mangere church (Presbyterian) where anything was possible with hard work and integrity.

I am so thankful for those lessons and hope to pass those on not only to my children but also with those I come into contact either through adult students I come into contact with, or as a board member at an Early childhood centre or through conversations where dreams can come true not only for our generation but also for the next...


Posted by helentauaufilisi at Monday, February 17, 2020 No comments: Links to this post

Today was a very special Valentines day with my beloved as we marked 20 years of Valentines days since we first dated on Valentines day 14th February in 2000 in which I thought he would either ruin all my Valentines days or else he was the one.
20 years and 3 children later we're still together and growing stronger having learned so much along the way with our faith in God and love with each other and from our families. I can only say that we've been blessed in having worked together through the tough times and especially in many celebrations.

As with many couples, it's not so much in the good times that we grow but it's especially when things aren't going so well that we've learnt not so much to rely on each other but to trust in a God who helps us to work through things.

Today it was neat to spend time together in sharing a special family dinner and then we went out for dessert and enjoyed time together with a family movie afterwards. A big thanks to our amazing Father who brought us together in the first place but that's another story...
Posted by helentauaufilisi at Saturday, February 15, 2020 No comments: Links to this post

Last week, we had a family outing to the movies to watch 'Jumani (2) The next level' starring one of our fave actors Dwayne Johnson accompanied by Jack Black,  Danny Devito, and Dennis Glover. We particularly wanted to watch the sequel as we'd all enjoyed the first movie.

Spoiler alert! We didn't enjoy it as much as the first and we were a little disappointed in the storyline that wasn't as credible as the first. However, if you are wanting to watch an action movie with some heart-racing scenes then the scene with the group running away from the baboons is one to watch.

There might even be another sequel as the last scene of the movie brings the 'fantasy world' into their reality and then one wonders how that came to be but that's the wonder of making movies whereby anything can happen but it doesn't always make for a credible movie...
Posted by helentauaufilisi at Sunday, February 09, 2020 No comments: Links to this post

This week, I've been busy working on an Infogram for explaining the course that I teach at Te Wananga o Aotearoa. It's a level 4 foundation year-long programme called 'Te Kunenga o te Ao Tikanga' course that embodies rangahau - Indigenous research and incorporating skills in Cultural competence.

I discovered this when I began researching around the course and found out that Careerforce, a government-appointed body that supports work-based training across all sectors, endorsed our level 3 Certificate in Tikanga Maori as a qualification equivalent and accepted for cultural competence (an 18-week course).

Our 36-week fees-free course builds on this and supports cultural competency through teaching:


This course is especially important for non-Indigenous teaching professionals, health workers and community workers etc. who work or support Maori, Pasifika or other indigenous peoples in their workplaces.

This has been an important concern that I've observed over the years as a teaching professional and in working within our communities with predominantly Pasifika, Maori and other indigenous peoples where situations can go very wrong if cross-cultural communications aren't observed.

Posted by helentauaufilisi at Saturday, February 08, 2020 No comments: Links to this post

Last night, our youngest reminded me that she had shared with a friend, in returning back to school, that she had seen Stan Walker recently at a shopping trip that we had at the Airport Countdown grocery store.

To give a bit more explanation, he is one of my favourite male Maori solo artists as he has a soulful sound (that even Michael Buble commented on) plus he's also a Christian and sings songs about his faith. Last year he released a couple of songs such as 'Choose' and 'Give' and both are beautiful songs to listen to.

To get back to the story, we happened to drop by to pick up some supplies and Stan Walker was standing at the Deli with a cap and a hoody on buying his own supplies. I recognized him instantly because he happened to turn quickly whilst checking out the food on offer. Plus I was aware that he had lost a lot of weight due to a condition that he has.

I also have this facial recognition condition that happens often (that my family have commented on) whereby if I see a familiar face (even if they've aged) like on TV etc. I can often place the name to the face very quickly.

Anyway, upon seeing him and instantly recognizing that he wanted anonymity in being covered up except for a small window of his face, I decided not to say anything to our youngest and kept shopping then paid and left ready to head home.

I then explained to her what I had seen. However, whilst explaining this to her, I saw Stan Walker walk past our car over to the car parked next to us (that reminded me of the retro souped-up mini coup) a Mini Cooper. He opened the door took off his hoody and hat and then left as we pulled out too.

With much interest, I told our youngest not to stare but that the driver next to us was none other than Stan Walker, we decided not to do anything except to enjoy the moment of seeing an artist that we both enjoyed listening to being in our near vicinity as he drove away...


Posted by helentauaufilisi at Monday, February 03, 2020 No comments: Links to this post

It's been interesting to read the media information and watch the first couple of programs for the first NZ Bachelorette, who is a 32-year-old doctor, that debuted this week. My initial interest was the tag that the Bachelorette had Samoan connections i.e. her dad being Samoan/German married to a prominent Auckland Uni lecturer who researches Pasifika topics. In the program, that's where it ends.

However, as the program continued I've started losing interest as although she has Samoan roots and background, the publicity franchise wheels continue to turn with more spotlight on the guys' antics, with spins and controversy to keep the viewers' interest at bay with no connections to culture.

I wish her the best in finding love from that group of guys and it's interesting to see what USA would term 'women of color' putting themselves out there (whether you agree or not) and the comments that the European or Western men say about her.

It's definitely something that doesn't sit well with me i.e. objectifying women through this type of program with some of the comments that are spoken, expectations etc. but at the same time it comes with the territory of accepting the rules of engagement for this program.

Predictably, towards the end, there'll be a lot of heartbreak (for those who don't get a rose and want one), tears shed as she makes heart-wrenching decisions about the 'one/s' to keep with twists and turns along the way as the producers and camera people see fit to film and edit.

But that's the problem with 'reality TV' in that it's really carefully edited TV programming that spins a particular view and story about real people, making real decisions that have cause and affect on others i.e. those with power and those who are powerless. I just hope it's worth it, for her, in the end...


Posted by helentauaufilisi at Friday, January 31, 2020 No comments: Links to this post

Summer days and at the beach...

It's been a busy week already with Auckland Anniversary holiday on Monday and then our middle child's birthday on Tuesday with the departure of my parents back to Samoa on yesterday.

The neat thing is about holidays is being able to spend time with family and enjoying food, music, sand, surf and a lot of laughs in between.

And pictured is a neat little lunch that our youngest made for me and her as a treat for taking her to the beach in which she spent most of the day between the park, the beach and the fountain.

The parking wasn't too bad either in that you just need a little bit of patience to be able to await a car leaving so that you can pull in close to the beach.

And not forgetting your beach chairs and mat so that you don't have to plant yourself on the beach with lots of sand encasing food, drink and clothes.

And now looking forward to next week with another beach trip planned for next week's Waitangi Day holiday for a family outing complete with lunch, music and lots of relaxation. Although, this time I might take a canopy just to ensure that we bounce those ultraviolet rays back into the stratosphere and not on our skin...
Posted by helentauaufilisi at Thursday, January 30, 2020 No comments: Links to this post

If you would like to purchase books please email: helentauaufilisi@gmail.com for more info and discounts for bulk buys. Thank you

The 1918 deadly epidemic in Samoa 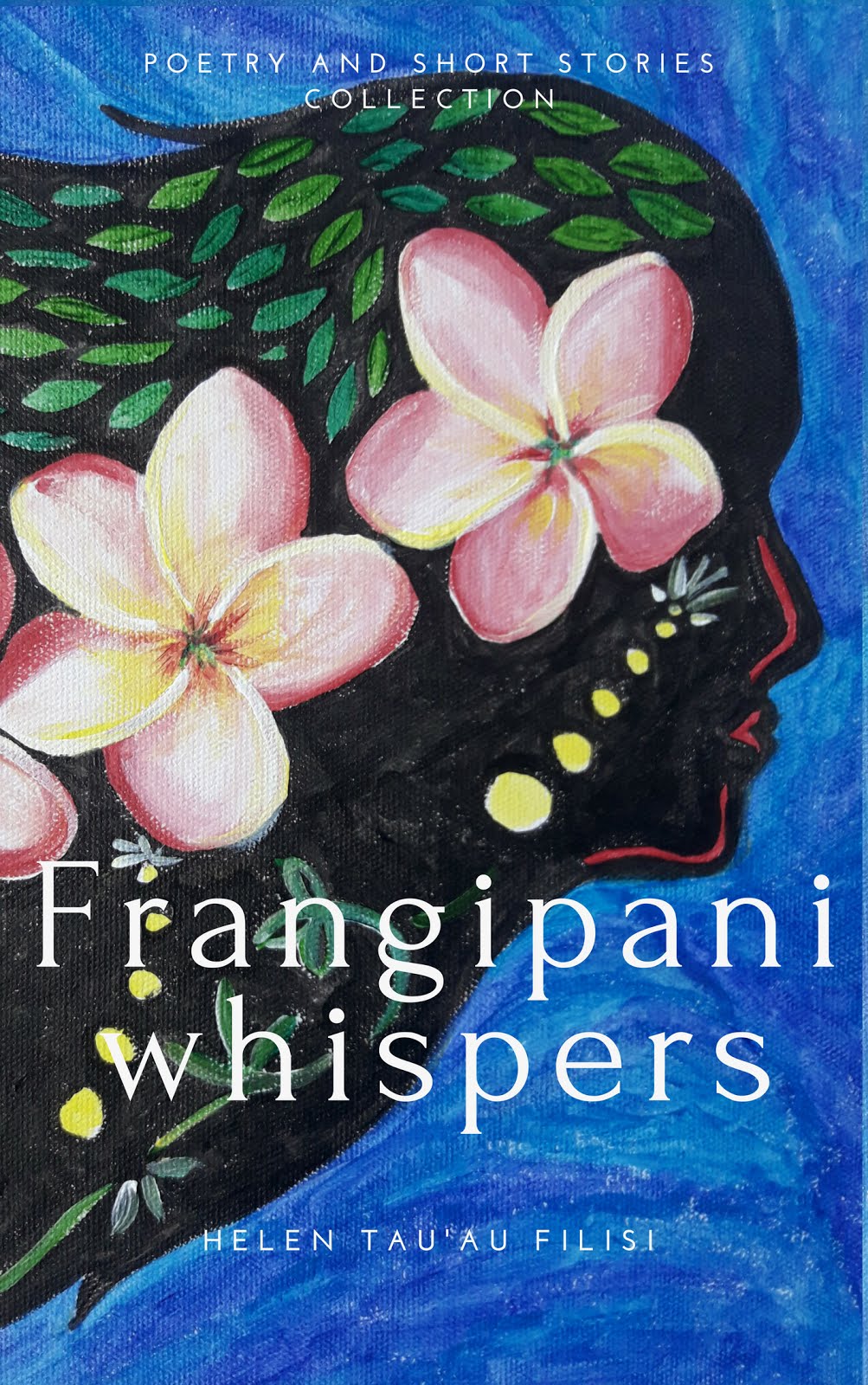 A5 (please request) A5 Edited

THE FOOTPRINT OF MOSO (A4 PORTRAIT)

Tagaloalagi and Fue (A4 Picture book)

Maui and Sina (A5 Play script)

Mount Vaea and the tears of Apa'ula (A4 Picture book)

Sina and the Tuna (A4 Picture book)

A5 (please request) A5 Edited